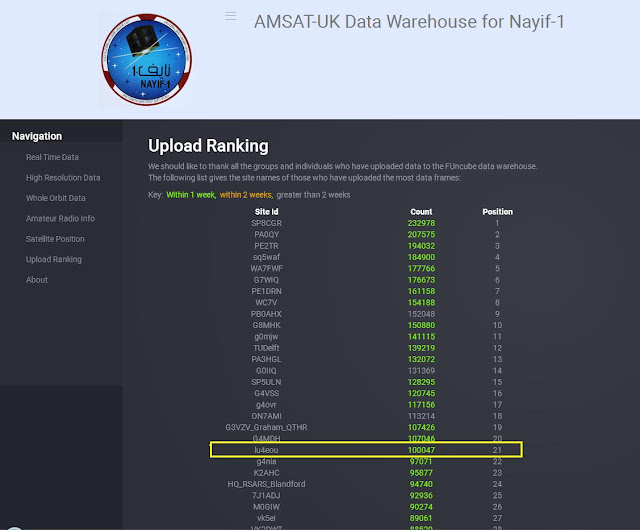 Initially, the U/v FM transponder will be open continuously for a period of one week. After the first week, operations will be scheduled between the U/v FM transponder, L-Band Downshifter, Virginia Tech Camera, and the University of Iowa's High Energy Radiation CubeSat Instrument (HERCI).

Schedule updates will appear in the AMSAT News Service Weekly Bulletins and will also be posted to the AMSAT-BB, AMSAT's Twitter account (@AMSAT), the AMSAT North America Facebook group, and the AMSAT website at https://www.amsat.org/satellite-schedules/

AO-92 was launched on the PSLV-C40 mission from Satish Dhawan Space Centre in Sriharikota, India on January 12, 2018. For the past two weeks, the AMSAT Engineering and Operations teams have been testing the various modes and experiments on board. Testing has shown that both the U/v FM transponder and L-Band Downshifter work very well. The Virginia Tech camera has returned stunning photos and data from HERCI has been successfully downlinked.

AMSAT thanks the 178 stations worldwide that have used FoxTelem to collect telemetry and experiment data from AO-92 during the commissioning process. The collection of this data is crucial to the missions of AMSAT's Fox-1 satellites. Please continue to collect data from AO-85, AO-91, and AO-92.

The L-band experiment will use 1267.350 MHz uplink with 145.880 MHz downlink. UHF and L-band uplink operation are set by the command stations; the operating schedule will be posted.